When the Guardian writes a piece about preschoolers and ADHD, as they do here , we don’t expect it to scaremonger or to conform to prejudices around this complex neurodevelopmental disorder. We expect some breast beating from the Daily Mail or the Telegraph, but we hope for sense from the Guardian. However, while medicating preschoolers is controversial, ADHD medication (please don’t call it drugs – this not pushing recreational ecstasy tablets or making toddlers smoke joints) is immediately written off as a Bad Thing – without any explanation for what type of medication it is. END_OF_DOCUMENT_TOKEN_TO_BE_REPLACED

When a piece like this comes out in the NY Times  it doesn’t always help the cause of seeing ADHD as a real issue, that people struggle with daily, and that those that are affected by it do deserve help. We don’t tell the short-sighted to try and manage without glasses, so why assume that the ADHDer has to settle down to difficult daily tasks without medication (or drugs, as the piece annoyingly calls them)?

First, is the author, a professor of Clinical Psychiatry Richard A. Friedman right to call it a disease? Not really. It confuses what it is, and it is already confusing enough – as disorders go. Disease is something one contracts, or that one gets over or rid of – like malaria or typhoid. Because ADHD is neurodevelopmental, ie the brain can develop and grow out of it, or at least many of the symptoms can be helped, it is better seen as a bundle of traits or a different brain wiring than a disease. You can’t give ADHD to anyone else after all, only your offspring because of the genetic link.

Secondly, are novelty-seeking jobs really a natural cure? Or small classes in school? Not really, not when inattention means that that adult or child will underachieve in any environment, unless some accommodation can be made to assist them to keep on task and pay attention – medication, coaching, teacher’s tricks. They aren’t going to learn or perform well in any environment, if they can’t stay focussed.

Finally – the jump in diagnoses does seem scary when you put it into percentages, but it is obvious really. Neuroscience is new science – a generation ago, people were just told to shape up,  mental health was seen as a shameful area of the medical profession, people were stuck in psychiatric institutions and the key was thrown away.

Given the genetic component of the condition, if a child has a positive diagnosis – it doesn’t take very long until one of the parents looks back at the difficulties in their life, and realises that they may have ADHD, too, ad that it’s just they were branded naughty, wrong, undisciplined, or are reading this in jail (expert Dr Ned Hallowell estimates that 20% of the US prison population have it – much of it undiagnosed). This then leads them to seek a diagnosis and medication (some of which is not apparently that different from caffeine – another Dr Ned observation) which then leads to what the author calls an “epidemic”.

Remember, in the UK, up until 2006, after the age of 18 it wasn’t even possible to get further medication for ADHD because it was deemed to have disappeared overnight, and adult ADHD did not even exist. Of course, if you take this as the base point, statistics and percentages are going to go off the Richter scale as people come forward to ask for help.

So, before suggesting that all ADHDers find a natural “cure” by following the path of our most famous UK ADHDer Sir Richard Branson, and become entrepreneurs ( hopefully without too much of the novelty-seeking risk taking associated with the condition, complete with pilots dying in test runs to space), let’s look at what the  new brain science is teaching us about this complex condition first. The more we learn about it, and the better we treat it and support those that have it (think of those unnecessarily locked up prisoners, who might have take a different course if not branded “wrong”, disobedient or dangerous at an early age) the better we might harness their human potential.

Only then will we have something approaching a natural “cure”.

Every now and then, someone comes along and sums up this complicated condition in such a neat way. Dr Ned Hallowell, author of many books on ADHD, talking more in Additude online magazine this week about Girls and why they often go undiagnosed. In his short video here , he ends by saying something so simple – basically, if your child is underachieving then go and get them tested.

I am sure it may be woefully obvious to an outsider, but to a parent – it is a Very Big Thing, getting your child or teenager tested for a neurobiological disability. Nobody wants to think there is something wrong with their kid, and you don’t want your kid to think  there is something wrong with them either. Especially if – in my case – they are now a teenager and fast growing up. But just as they grow up, so the stakes get higher, with grades and exams counting for more and more, and with their threat of slipping further and further behind.

So Dr Ned has a point – don’t complicate it. If your child presents – as so many ADHDers do (who can seem to effortlessly excel in professions like acting and stand up comedy, where their bundle of traits become a positive rather than a negative) as an articulate, engaged, and entertaining person- and yet woefully underachieves at school – get them tested.

It’s not complicated. It’s just about UnderAchievement. It’s something only a parent or a caring teacher can tell. That’s the only starting point you need for the journey. And if they don’t test positive for ADHD, then back to the drawing board.

Why is Negative So Much More Attractive than Being Positive?

I’ve written on this blog before about Kevin Roberts being the poster boy for ADHD and now have completed his rather good book – Movers, Dreamers and Risk-Takers, Unlocking the Power of ADHD. I like it, ironically, because he is so positive about the whole ADHD issue, something that the Neuroscientists like Russell Barklay are not (“It’s a Neurodisability, why dress it up as anything else?”)

As Roberts writes: “I have come to the inescapable conclusion that I feel more alive when I am being negative. Opposing something gives me more juice than supporting it. We ADHDers create negative dynamics in many areas of our lives… END_OF_DOCUMENT_TOKEN_TO_BE_REPLACED 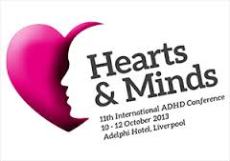 A lot could be said about the two days spent in the Adelphi Hotel in Liverpool, along with a hundred or more ADHDers, all twitching to get out of their seats.

The atmosphere reminded me of those signs in the pub above the Optics saying: “You don’t have to be mad to work here… but it helps”. There was a frenetic, hyperkenetic pace to the whole affair, and any speaker not an ADHDer, of which there were only a few, paid for the slowness of their delivery with the comings and goings of the participants. They weren’t so much booed off, as bored off. Anything went at this conference, and usually it was people leaving the room. END_OF_DOCUMENT_TOKEN_TO_BE_REPLACED

I wonder how families who have only the NHS to fare cope when it comes to “Child and Adolescent Mental Health“?  Our initial meeting with the NHS pyschiatrist left me holding some Concerta 12-hour stimulant medication – and a date for a follow up meeting IN A MONTH. A Month was too long, too long by 28 days almost, as the daily rollercoaster of keeping our son on track began. END_OF_DOCUMENT_TOKEN_TO_BE_REPLACED